The masculine polarity, as I see it, is characterised by clarity, direction and purpose. This can be contrasted with the feminine polarity, which is characterised by openness, radiance and vulnerability. The masculine and the feminine represent the two opposing parts of the totality, the yin and the yang. One cannot exist without the other, and the two compliment each other perfectly. Hence, there is a strong attraction between men and women. 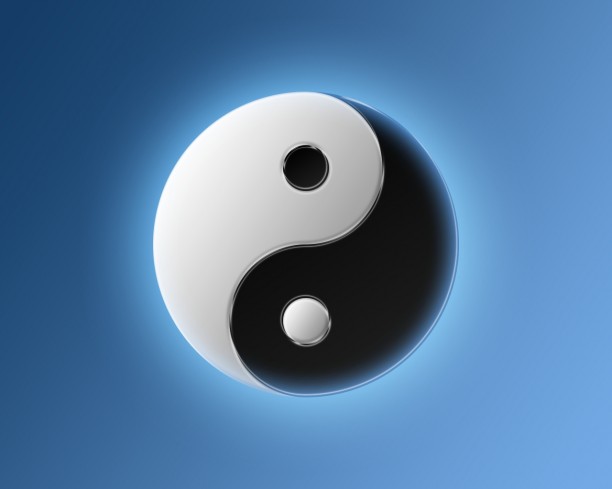 Why then do so many men struggle so much in their dating lives?

To me, it seems to be a major problem that most men only possess masculine traits and almost nothing that is feminine. Most men have very little capacity to be open or vulnerable. They only know what they know, which is how to be a man’s man. The idea of showing something feminine would have them recoil in horror.

But that’s the way it should be isn’t it? Surely a man should be 100% man, and that will be what makes him the most attractive, right?

No. Not in my estimation.

As far as I can see, a man who is nothing but masculine, without even the capacity for a feminine side, is missing something. And in fact, all those masculine qualities that he possesses appear somewhat diminished because of this. Because there is no contrast, no depth.

In reality, the true embodiment of masculinity includes the capacity for femininity, the seed of the feminine. This can be seen clearly in the yin/yang symbol (pictured) whereby each opposing part of the totality contains the seed of its other half.

When a man embodies his natural qualities of clarity, direction and purpose, and these are offset by the capacity for openness, radiance and vulnerability, it gives him both depth and contrast.

Depth is created through the ability to express both aspects of the totality. A man who has the capacity for the feminine no longer rests in just the shallow waters of the masculine. He has the full range of expression of both polarities. Though he may have a greater tendency to express his masculine side, he is not limited to this, he has the infinite depth of the totality.

In this depth a contrast is created. A man’s primary expression, that of the masculine, is amplified and illuminated in contrast to his expression of the feminine. Without this contrast his masculine side is neither amplified nor illuminated. Instead it is almost invisible, just as the qualities of light cannot be visible if there is only light. Some darkness is needed in order to see clearly the different aspects of light that exist.

A man’s masculine side is brightly illuminated by his capacity to be open and vulnerable. When a man walks up to a woman and expresses directly how he feels about her, his purpose and direction appears bigger and brighter through the openness of expressing his feelings. As he rests in the vulnerability of not knowing what is going to happen, whether or not he will be accepted or rejected, his purpose and direction is shining forth, illuminated by his openness and vulnerability. His masculinity is deep and true, he is absolutely polarising and magnetically attractive.

Contrast this with when a man makes an advance on a woman without expressing exactly how he feels about her. He is no longer allowing himself to be open or vulnerable, and so his purpose and direction is no longer clear. In the absence of the contrast created by a feminine expression, the masculine attributes of his communication are much less defined. The power of his expression is diminished, as is his polarisation and attractiveness.

Don’t take my musings on this subject to be true, but don’t dismiss them as false either. Test it out in your own experience and see if it’s true for you. If you’re a man’s man, and someone who considers himself as having little capacity for feminine expression, it might be worth experimenting. Whenever possible, try to add more openness, radiance and vulnerability to your life and expressions.

In particular, experiment with being more vulnerable. This is the greatest strength of the feminine. Being vulnerable is a quality that we men can benefit from greatly, and a quality that will create great contrast with our masculine traits. Make it a practice to genuinely share something vulnerable about yourself at least once everyday.

You might be surprised at the results. As you become more in touch with your capacity for feminine expression, your true and deep masculinity might just shine through as a result, and cause a polarisation of attraction between you and the women you meet.