First off, I hate the word pick-up! I’ve chosen it for use in the title as it creates contrast, and what I really want to talk about here is the power of contrast and the apposition of opposites.

When I say pick-up, what I’m really referring to is not the insidious belief that one can acquire women as if they were an object without their consent (as is implied by the term), but rather the ability to express ones self in a powerful way with a woman.

That’s easy enough to understand, but what is Yin & Yang and how does it relate? 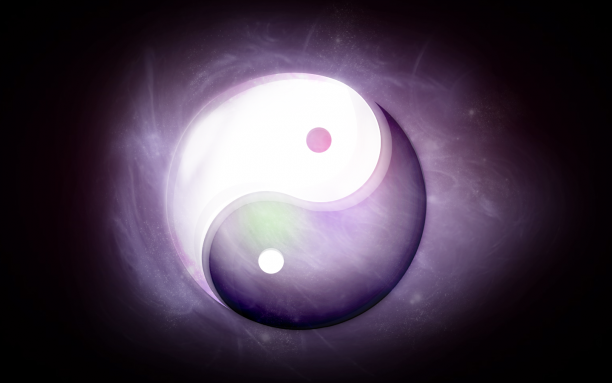 The terms Yin & Yang are derived from Chinese philosophy to describe how opposing and contrary forces are actually complimentary and part of a greater whole. The quintessential example of Yin & Yang being feminine and masculine, Yin representing feminine and Yang masculine.

Yin corresponds to the passive, open, receptive and nourishing nature of the feminine, whilst Yang aligns itself to the active, purposeful and incisive directness of the masculine.

What women MOST respond to is a form of self-expression that incorporates both Yin AND Yang, rather than just one or the other.

Of course, everyone gets this all muddled up!

The self-proclaimed pick-up guru will tell you that successful interactions with women are only about being direct, purposeful and commanding (Yang). Meanwhile, the warm-hearted nice guy will tell you that women respond to being open and welcoming and adaptable (Yin).

Neither of these perspectives is totally wrong.

In fact, what the pick-up guy is advocating is something that might create reasonable success on occasion, and even what the nice guy suggests may have some merit with the right woman in the right situation. However, if you are not operating from the whole and not bringing both Yin and Yang to your interactions, there is a definite limit to the power of your self-expression.

So, what do I mean by bring both Yin and Yang to your interactions?

I mean combine the more Yang aspects of your self-expression, such as directly expressing your intent, with the more Yin aspects, like being open and unattached to whatever response she gives you.

Tell her exactly what you find sexy about her (Yang), and be open to the possibility that she may not respond favourably (Yin).

Act upon the desire to kiss her (Yang), but understand that she may not be ready (Yin).

Lead the interaction forward with direction and purpose (Yang), and adapt the pace of your lead in response to her comfort levels (Yin).

Fundamentally, you must align yourself with taking command and steering the ship in the right direction, but also be sensitive enough to adapt to the weather. The Yin & Yang of your self-expression extends even further than this though, all the way down to the subtleties of your verbal and non-verbal communication…

Penetrate her very being with the sexual desire in your eyes (Yang), and welcome her with the warmth of your smile (Yin).

Allow your touch to be charged with purpose and passion (Yang), and give her the space in between touching to feel at ease (Yin).

Break rapport by teasing her incisively (Yang), but also praise her and allow her to grow (Yin).

It is this combination of both Yin and Yang that creates the kind of harmony in an interaction that allows the maximum scope for attraction to arise.

A pushing forward and a pulling back.

Direction and no fixed destination.

It is the dance back and forth, the contrast and the apposition of opposites that is magnetically attractive. It is the Yin AND the Yang that magnifies the potency of your self-expression to levels that deeply and powerfully draw a woman in.