Mixed Martial Arts (MMA) represents a fascinating arena for exploring the psychology of success, and, not surprisingly, a lot of the lessons are easily transferable to other areas of life, including dating. 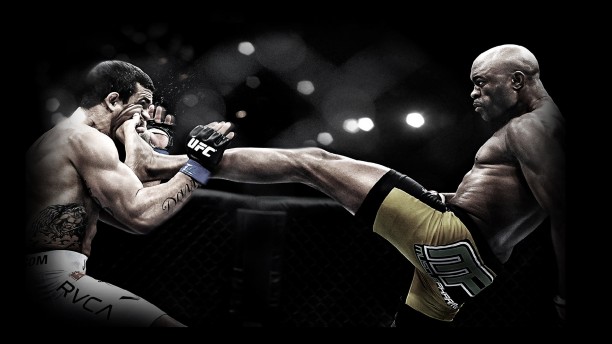 On Saturday night, Ronda Rousey, the woman described as ‘the most dominant champion in the UFC’ by multiple sources was spectacularly knocked out with a vicious head kick by Holly Holm in what was a remarkable upset.

This loss could be put down to a number of factors; Rousey’s comparative inexperience as a striker, her failure to capitalise on the ground, a poor tactical fighting strategy for the opponent in question. No doubt all of these were important factors to one extent or another.

However, we should be open to the possibility that there was something else going on, something missing in terms of what UFC champion Chris Weidman describes as the most important part of MMA -the mindset!

Most will find this laudable as Ronda Rousey is perceived to have a bulletproof mindset and supreme confidence. No doubt she does have an incredible confidence and has always carried herself with an air of invincibility.

Most UFC champions carry themselves in such a way, in such a way that their own defeat seems impossible, even though MMA is one of the most unpredictable sports in the world. However, in some cases that air of invincibility is tempered by a humility and openness to even the worst of possibilities.

For instance, here’s how Aubrey Marcus described the mindset of the man many describe as the greatest mixed martial artist of all time, Jon ‘Bones’ Jones, prior to his grudge match with Daniel Cormier: 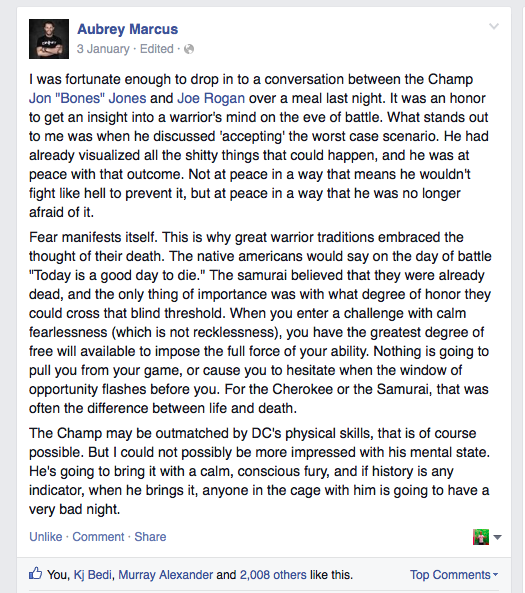 Publicly Jon Jones never verbalised the possibility of failure in this grudge match when questioned in the media, so important is it to project an air of confidence in the face of your opponent. Fascinating however that on some level he was at peace with ‘the worst case scenario’ against a rival that he bitterly despised.

Aubrey beautifully highlights the parallels between Jon’s mindset and the ways of the Cherokee and the Samurai. These philosophies are timeless, beautiful and can teach us so much about how to succeed in life, including dating.

But before I get into that, back to Ronda Rousey. My question is, did she have this level of peace with the possibility of failure?

Maybe! Only she will really know.

Like I already stated, it’s important to project an air of invincibility, particularly in the face of an opponent who is actively plotting your demise and in a sport where a lack of confidence is a one-way ticket to a brutal knockout or a broken limb. So, perhaps she projected an unwavering air of certainty in her success publicly but privately she was totally at peace with even the possibility of failure.

However, I have my suspicions to the contrary.

Whilst all UFC champions seem to carry a level of certainty in their success, Rousey’s seems to have been at another level, a level in which it almost seems absurd that she could lose. From regular claims that she will retire undefeated to recently suggesting she could beat everyone in her division with one hand tied behind her back, she’s appeared to project a level of certainty in her success that would make the very idea of failure seem ridiculous.

I personally don’t believe she had accepted the ‘worst case scenario’ in the same way Jone Jones did. On the contrary, I believe she fiercely resisted even the thought of it.

Ultimately, only she’ll know whether she was embracing this flawed mindset, or whether her defeat was simply attributable to the technical side of the sport. However, one thing is for sure, if she did indeed fail to make peace with the possibility of defeat this would have undoubtedly contributed to her downfall.

So, why is making peace with failure so important? And what can you learn from it? And how is all this stuff about mindsets and MMA applicable to relating to women?!?

Allow me to clarify.

Lets get back to the Samurai. Here is a quote from Hagakure, Way of The Samurai:

It is when one outcome is rigidly clung to and another is fought against vigorously that the natural flow of energy and the ability of an individual is compromised beyond measure. No longer is one able to expand to the full range of their capabilities. Instead, they are inhibited, restricted and stifled, a shell of their former self.

And all this is absolutely the case when you go and strike up a conversation with a woman you’re attracted to. If you have some clearly defined measures of what success or failure would be in this situation and you absolutely cling to the hope of success and resist the possibility of failure, you’re interaction will be a shadow of what it might otherwise have been.

Whatever you may have perceived to be success in this case will almost certainly never come to fruition.

Conversely, if you have the desire to connect with a woman but you’re open to the possibility of her shutting you down, of not receiving your presence, of having no interest in you, then and only then will you be absolutely free and fearless in your expression and give yourself the best possible chance of connection.

This isn’t a case of not expecting success. When you strike up a conversation with a woman you should have every expectation that it will go well, but you should also be completely open to the fact that it could just be an awkward and difficult mess. It is this mindset that sets you free, that allows you to be your uninhibited best.

Do this and more often you’re authentic genius will shine through in all it’s glory, and whatever outcome you desire will be available to be fulfilled.

Perhaps this is just what Ronda Rousey needed on Saturday night. Regardless, it’s what you need in every endeavour you partake in, including your endeavours with women.

Sebastian Callow is a personal dating coach for men in London. Unlike other dating services he provides a practical, real-life coaching experience that actually involves meeting and interacting with women in everyday situations. Sebastian helps men develop the comfort and ease to express themselves with raw honesty. If you're unhappy with your dating life and you're hungry for change, the Personal Coaching Course could be exactly what you need. holly holm, ronda rousey, ufc

4 comments on “Why Ronda Rousey lost her UFC title: Wisdom of the Samurai…”