We don’t often promote or recommend other people who give advice in the field of dating and self-development but Mark Manson is an exception. 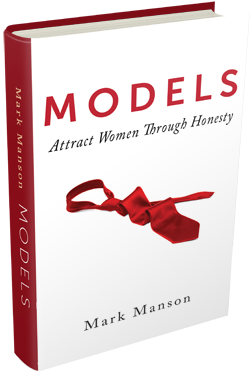 Mark is a former Dating Coach and currently a self-proclaimed author, entrepreneur and life enthusiast, whose writing has empowered both men and women around the world.

He’s one of the few guys out there giving an authentic and inspired message that helps guys evolve towards their optimum potential. This ebook is the only ebook we ever recommend to our clients on the subject of dating/seduction/pick-up.

Frankly, Sebastian was planning on writing a book like this one for AMW but Mark Manson got there first and wrote something so exceptional that we decided to promote his book instead!

What did Sebastian Callow have to say about Models?

“After 7 years of exploring the field of dating, seduction and pick-up, and having read countless books with all kinds of weird and wacky theories about how to relate to women, I can say that I’ve wasted a hell of a lot of time trawling through rubbish dating material.

However, this was not the case with Models. Mark Manson’s book truly is a diamond in the rough.

Models is a great education in expressing yourself, evolving your self-esteem and relating to women in a way that is powerful, effective and healthy.

-Sebastian Callow, Founder and Head Coach at Authentic Man Within

Models Described in a Nutshell

Models is a book on becoming an attractive man that’s based not on tricks, tactics, games or techniques, but on self-development. Its truths are backed by decades of psychological research. Its focus is on the emotional process of seduction rather than agonizing over logical steps. Its goal is to create powerful connections with women instead of trying to impress them.

It’s the most mature and honest guide on how a man can attract women without faking behaviour, without lying and without emulating others. Stop acting like an attractive man and BE an attractive man.

“The insight you have, not just about women but life in general is amazing.” – Ben